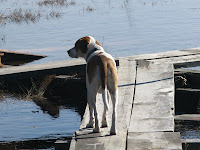 The Gloucester Times was kind enough to mention Harold on Saturday and his award from the American Schooner Association which was presented to him at the annual ASA meeting in Mystic, CT where he was also the featured speaker. It was a great event and well worth driving down to Mystic, CT.  Prior to the event, touring Mystic Seaport in the off-season, at dusk, in February was unique. It was a Friday afternoon and the place was about to close but we were able to have a quick walk around.
Looking around at the schooners covered at the dock, shrouded by the dim street lights and the grey water it made that feeling of winter hibernation complete. But, the return of the sailing season is not as far off as it seems!
When the ASA gathered to meet on Saturday, we also got the treat of being around good people and hot coffee - always a great combination. To read the Gloucester Times article, click here.

- Laurie Fullerton
Posted by Harold Burnham at 11:25 AM No comments:

Fergus Stuart of Edinburgh, Scotland comes to the yard. 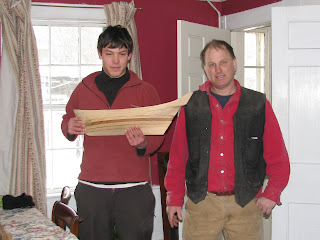 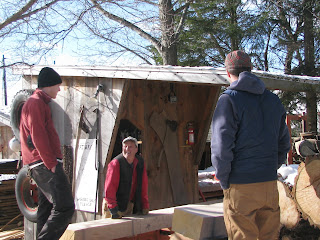 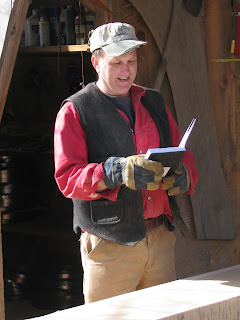 Young Fergus Stuart from Edinburgh, Scotland is working with Harold this week and is in the USA for four weeks. He found out about Harold through reading this blog (yeah!) and he works in Scotland using traditional wood construction techniques and is currently employed by a company that is undertaking the construction of the Robert "Robbie" Burns Memorial Museum north of Edinburgh. He is getting some great tips and bits of wisdom from Harold who is pictured above reading from the bible...no, seriously Harold is reading his work log from yesterday talking about the number of nails (36!) he took out of the wood they cut. This piece of wood will be part of the keel for the new schooner Harold is building.

Ferugs and Jeff Lane of Essex are also in the picture above at the sawmill.  Interestingly, Fergus tells us that in his construction project in Scotland they buy a lot of wood from France. In cutting the timber, they don't encounter nails as much as they do old bullets still deeply impacted into the trees of France since both WWI and WWII.

Fergus is a great asset to the yard and good company. We hope he comes back again!

- Laurie Fullerton
Posted by Harold Burnham at 8:17 AM No comments:

Harold attended the annual meeting of the American Schooner Association this past week in Mystic, CT which is always a worthwhile place to visit for any shipwright. By arriving on Friday, it gave time to tour Mystic Seaport which was great to do in the off-season. Harold was able to join an ongoing private tour of the whaling ship Charles W. Morgan, the last surviving American wooden sailing ship and the oldest American merchant ship afloat. Master shipwright Quentin Snediker led the private group into the lower hold where the ceiling has been removed to expose the frame. The exposed frames of this 109-foot ship were lit with a soft light that, for Harold, was like viewing the Sistine Chapel. After finally leaving the ship and with the museum closed up for the night, Harold visited the famed Griswold Inn in Essex, CT (a great old inn with a pub that has a pot belly stove that has been serving customers for two centuries. The inn is full of museum quality paintings, authentic memorablila while the pub has great, live music every night). 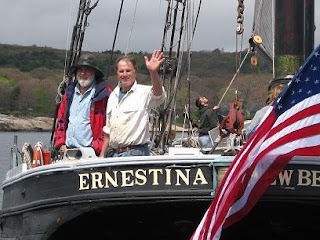 The following day the ASA gathered for their meeting where Harold was the keynote speaker and he talked about the restoration of the schooner Ernestina. The group was assembled from areas like the Chesapeake Bay, Provincetown, Gloucester, and further afield where many of these towns hold fantastic schooner races during the summer and fall.

Harold was given a great introduction by the board members of the ASA and an ASA award...and for those who did not know Harold and the work he has done, a contingent from his hometown of Essex that included the lovely Daisy Nell were there to speak about how important Harold is to the Essex community. A good time was had by all.
Posted by Harold Burnham at 3:55 AM No comments:

Harold "Professor" Burnham Gets a Gig at MIT 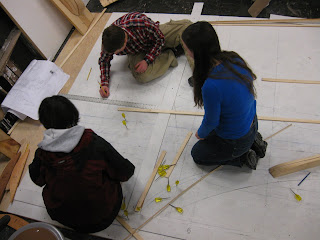 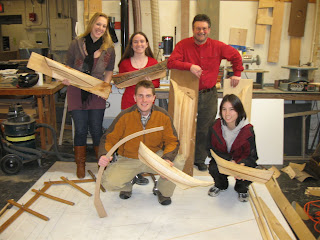 Hands on teaching the Burnham way gives students a chance to loft a schooner. As part of a course on lofting at the Hart Nautical Museum, Harold taught for three days at MIT last week to students where they lofted the Maine a quarter scale from the model. As much as being a good teaching tool. The students were great and said they hope to come by for the frame up and other activities coming soon!
The "graduates" from left to right: include  Kathleen O'brien, Kimberly Santos, Kurt Hasselbalch (curator at the MIT Hart Nautical Musueum) and in the front row Dave Cope and Leah Hokanson.
Posted by Harold Burnham at 10:29 AM No comments: