This article appeared today in the Boston Herald online. Harold is going to have fun down in Dedham tomorrow...judging the contest!  Check it out at this link http://www.bostonherald.com/blogs/entertainment/jills_boston_style/?p=826&srvc=home&position=recent or read below:


Cam Neely is lined up for tomorrow’s grand opening of Carhartt’s first New England store at Legacy Place in Dedham (next to Kings).

The man to see - whose Essex boatbuilding shop inspired the store - is Harold Burnham. The 44-year-old, who owns H.A. Burnham, donated more than 30 pieces of worn Carhartt to the company.

“The only clothes we found that stand up are Carhartt. It stands up to the publishment and it’s comfortable to wear,” he added (see Burnham images below).

Burnham also sold the company sails and half-models, which are being used as art in the store.

“They photographed the shop and the yard, and the New England quaintness of it all,” he said. “They modelled the store after my shop. The signs are on the counter. I consider it a real honor.”

Tomorrow’s 4.p.m ribbon-cutting - er, sledgehammering (seriously) - is open to the public, and will also include a Wicked, Worn and Torn Carhartt contest with new merchandise being the prize.

Posted by Harold Burnham at 12:04 PM No comments:

Ardelle In the Creek 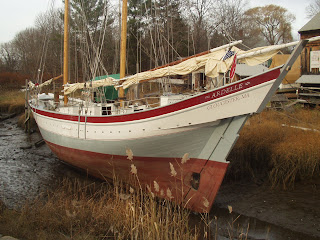 Thank you Len Burgess for sending us this nice shot of the Ardelle at its winter tie-up (top photo) and Messing Around in Boats publisher Bob Hicks for the second photo!  Harold has been busy pouring cement into her bilges and is finishing up the foc'scle tomorrow. He has the cement mixer on the deck of the Ardelle and has been on his hands and knees pouring cement for ...well, way too long he feels. Harold should be pouring the last bucket this afternoon and he can then finally start putting the boat in order for the winter.  Before that, he may have the boat decorated a bit for next Friday's arrival of Santa at the town docks of Essex. Might as well start getting into the Christmas spirit!

Posted by Harold Burnham at 3:51 PM No comments:

A Good Night and a Thank You

We had a gathering last Saturday night with a lot of the crew coming by with friends. It was great to see everyone and we were able to set out a great spread of food thanks to everyone who brought something. We also had quite a crowd on the schooner Ardelle which is now in the creek. Finally, we had a bonfire in the middle of the yard so everyone got to move around and go from house to boat to fire and back again. By the end of the night, most of the people were inside and it was overall a great time. Bruce and Kathy Slifer were also here and what we didn't know was it was their wedding anniversary...so happy anniversary. Although it is quieter around the yard right now, it is great to know that we all still like getting together. On that note, enjoy Thanksgiving everyone. Have a great time with friends and family.


Posted by Harold Burnham at 9:47 AM No comments:

A Short Clip By Nancy Dudley of the Ardelle

Nancy Dudley did a nice video on YouTube of our recent river "turn around" and she has put it to music. Its great...thanks, Nancy!

Check it out here:

A November Day on the Essex River

Posted by Harold Burnham at 7:43 AM No comments:

A Boston Globe Article about Maritime Gloucester and the Ardelle

A change at the helm for Maritime Gloucester

November 13, 2011|By Joel Brown, Globe Correspondent
Tom Balf looks over his domain as the new executive director of Maritime… (Lisa Poole for the Boston Globe)
GLOUCESTER - Downstairs at Maritime Gloucester, some fifth-graders watched as an instructor dissected a cod. Upstairs, Thomas Balf was dissecting the future of the city’s harbor.
“There’s this connection between the great maritime history of Gloucester and what might that maritime future look like,’’ he said.
Balf, 53, starts work Dec. 1 as the new executive director of Maritime Gloucester, formerly known as the Gloucester Maritime Heritage Center. Balf fills the role of Harriet Webster, who held the post since before the waterfront center opened in 2002, and died in June after battling a blood disorder. But even without her loss, the recently renamed nonprofit organization would be at what Balf calls a “pivotal’’ time.

To read more click here
Posted by Harold Burnham at 11:37 AM No comments:

A November Turn Around and An Impromptu Reunion


Today we took the Ardelle out of the creek and turned her around and we happened to have Chad Gadbois and his son and Tad Beck, who turned 93 today on board among others. After we got in some more of the crew turned up to say hi so it was an impromptu reunion. It was great to see everyone...since the Ardelle got sailing in September we have not seen the crew as much and we have all scattered or gone back to our lives. It must have been one of those days where folks felt drawn to the boat because we had quite a great gathering. Hope it happens again soon!
Posted by Harold Burnham at 5:29 PM No comments:

Back Home in Essex - But What a Great Ride!

This week Harold took our friend David Wyman out for a final sail on the Ardelle along the Essex River. David is a marine architect who worked closely with Harold and the Coast Guard during the design and construction of the Ardelle. We thank him very much for his kind assistance and this week was his first opportunity to take a sail. He was not disappointed!

The Ardelle will be in the creek near the barn for quite some time, now, and perhaps for the whole winter. We were not sure what to think about the ice around Ardelle this winter...but, with most everything around here, somehow the right decision will come to us.  In the meantime, we think that the little creek between the Essex shipbuilding museum and the Burnham yard might draw a few of Cape Ann's artists and photographers and we say come on down!

Work continues here at the yard and so, I feel, should the blog. Hope you can continue to read about life at the boatyard and of course, we welcome your photographs from this epic year when the schooner was built, launched and sailed. We could not have done it without you..all of you! Do come sailing next spring/summer and we already have a few adventures planned. On my part, I do have to agree with Katherine Hepburn's famous line from a Philadelphia Story everytime I think of the Ardelle..."my, she was (is ) yar." She really is.
Posted by Harold Burnham at 4:43 AM No comments: