Not Bad for A Week's Work 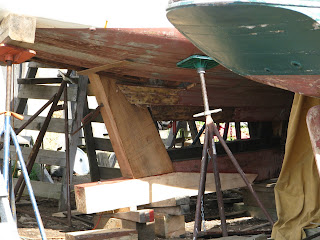 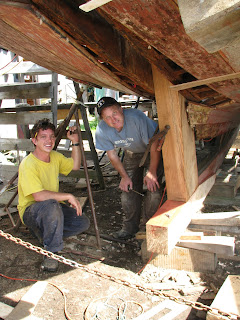 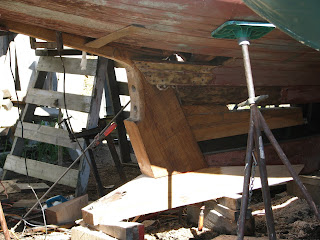 Harold and Ben Spivak have been working at a rapid-fire pace this past week (just another day in the boatyard for Harold) but he now has a much needed repair job near completion on Sara Beck's 1936-built Friendship Sloop the Flying Jib. Ben and Harold (and Kate & Sara, too!) have used one red oak log to complete a masterful job where they scarfed a new piece on to the after-end of the keel; replaced the stern post, replaced the after deadwood and they also added a new horn timber, added a new transom knee and are currently building a new rudder. As Ben commented just now," not bad for a week's work and all out of one red oak log." And, as Harold mentioned,  to paraphrase "I  did use red oak over white oak  [and yes, Harold is saving his coveted white oak for his new schooner to begin construction next month) but the Flying Jib was originally built with red oak over 70 years ago and will still have some good sailing days in her!" The Flying Jib is having its first major refit in some time and it is nice to see new life in this 74-year old boat.
Posted by Harold Burnham at 6:32 AM No comments: 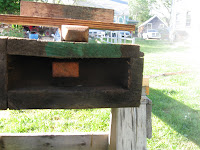 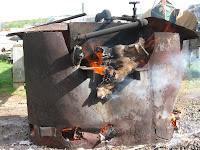 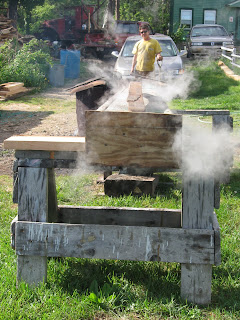 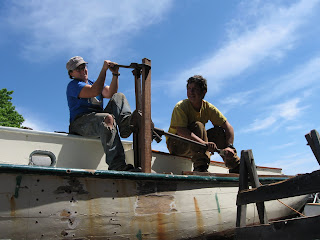 Ben Spivak of Colorado and Kate Tansky are pictured here working on the Flying Jib, owned by Sara Beck of Topsfield, here at Burnham Boatbuilding. Ben and Kate are a great team and they have been very diligently sistering frames in the Flying Jib. Ben and Kate are driving these new ribs down through the covering board all the way to the keel. It is a great way of adding new life to an old boat...and hopefully giving the Flying Jib many more seasons (or at least a few!) and we are very impressed by the hard work and dedication of Ben and Kate. We also love their banana bread!
Posted by Harold Burnham at 10:06 AM No comments: