It All Started with A Keel

The keel for the new schooner Pinky Ardelle is layed just about in the same spot as the schooner Fame keel once rested in 2003. The result was a beauty and here is a picture of Fame on launch day. In the not so distant future, this keel will turn into something that is clearly worth watching go up and by spring slide down the ways into the water...here's hoping!
Posted by Harold Burnham at 9:18 AM No comments:

Keel, Patterns and Next Stop Frame Up! 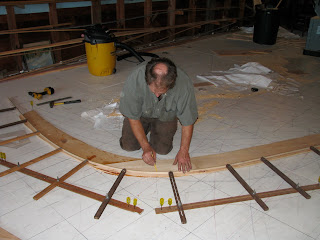 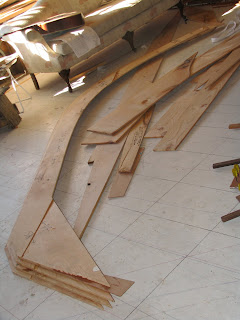 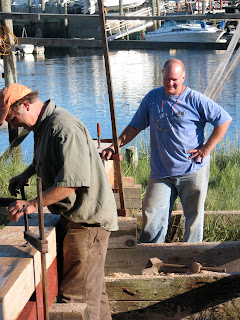 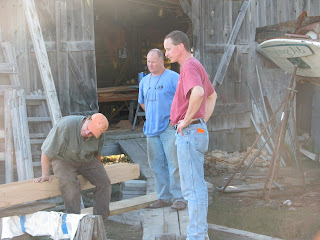 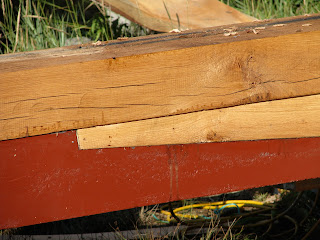 It is hard to keep up with all the work going on right now in the yard. But, upstairs in the loft Harold is pictured working on a pattern that will become the actual frame. His right hand man is Chuck Redmond (in blue shirt) from North Andover, MA and also pictured here is Andrew Spinney, who helped Harold build the FAME in 2003. Andy and Chuck have already been a huge help and their skill and great attitudes are a real bonus.  Pictured here at bottom is the keel (not yet bolted or glued) but it does fit like a glove!
Posted by Harold Burnham at 6:28 AM No comments:

Keel Is Cut for the Pinky Ardelle 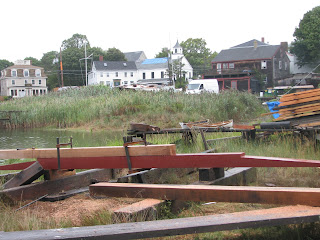 The keel is taking shape and in a day or so the steel and oak will begin to look like the beginnings of a vessel. The process is fanastic to watch and when the keel laying ceremony takes place on Sept. 6, Labor Day, the community will be able to sign the steel keel or say good luck or etch some kind of imprint onto the steel while a ceremony takes place with Sen. Bruce Tarr and others saying a few words.  A long-standing tradition, the keel laying marks the ceremonial beginning of the ship's construction. Forming the backbone of a ship, the keel is the first part of the vessel to be constructed. The key part of the ceremony is the "Authentication of the Keel" which symbolizes the verification of the keel being 'truly and fairly laid' (see the section on lofting the lines).
Harold is pictured below cutting out what will become part of the keel for the new Schooner Pinky Ardelle. Thank you Dan Tobyne  for the photo. More to come on Dan's photography. 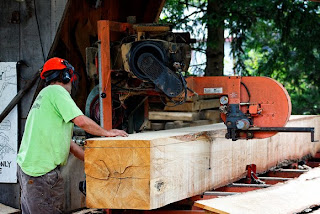 Posted by Harold Burnham at 10:30 AM No comments:

August in Essex - the Cousins 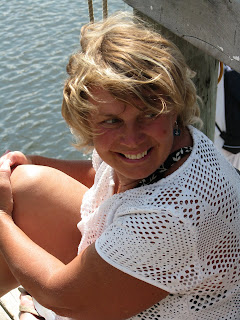 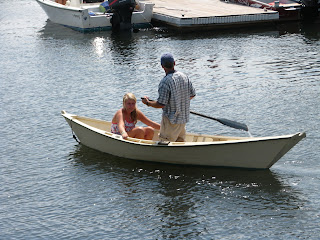 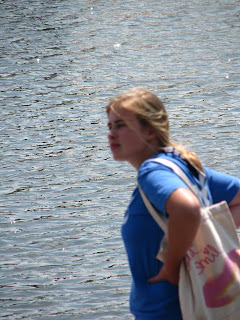 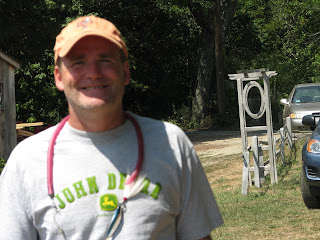 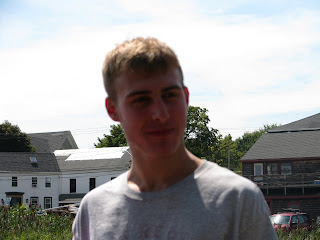 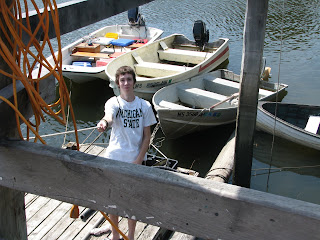 One of the other cool things about living here is that in August the "cousins" come to town for up to a month and stay just down the road at an old family property. They usually come down to the boatyard in a big gang and head out on the Fat Cat, a Marshall Cat boat, and various vessels to spend some of the last great summer days down rivah.  Pictured in some of these photos are Patty, Tom, Sara, Olivia, Stephen, Andrew and Matt as they head down to the dock and out to the beach.
Posted by Harold Burnham at 10:44 AM No comments: 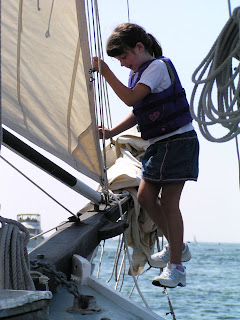 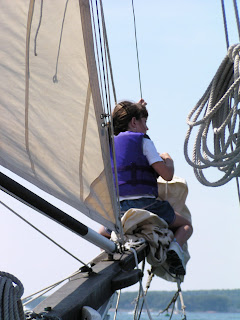 There is a lot of excitement building for the Sept. 6 Frame Up day here in Essex, when the real visible beginnings of a new schooner take place. The name of the schooner will be the Pinky (that is the type) and Ardelle so we call it the Pinky Ardelle.  Ardelle was the name of Harold's grandmother and the house we live in and the boatyard were once her home... but equally important Ardelle is the middle name of Harold's only daughter, Perry Ardelle Burnham.  This is an older picture of Perry Ardelle, who is now 14, and she is today a beautiful girl...as she was then...and she is as comfortable and capable on a boat now as she was then, too, so long ago when this picture was taken. Go Perry!
Posted by Harold Burnham at 7:41 PM No comments:

A New Schooner Rising in Essex

The Gloucester Times reporter Stephen Fletcher wrote a nice piece on Saturday about the new schooner Harold is building. Be sure and come to Frame Up day on Sept. 6 at Burnham Boatbuilding and the Essex Shipbuilding Museum!

A new schooner rising in Essex

ESSEX — Shipbuilder Harold Burnham says he's looking to revive a piece of Essex history on Labor Day.
That's when he plans to "frame up" his newest full-sized schooner, the Ardelle.

On Labor Day, Burnham and a few others at HA Burnham Boat Building, plan to hoist the nearly 9,000-pound boat's initial frames onto the keel for the start of its full construction.

He described the schooner as having "heavy construction" — where the frame was not bent but sawn out, in a manner loyal to Essex shipbuilding traditions.

Within that tradition, the Ardelle will stand as Burnham's sixth schooner and his fifth in the "heavy construction" style.

He started building boats as a full-time occupation when his son was born in 1994 after working as a merchant mariner.

The new boat will be neither a replica nor some sort of museum piece, Burnham said he plans to use the Ardelle for charters based out of the Gloucester Maritime Heritage Center on Harbor Loop. Burnham's Boatbuilding also created the Schooner Thomas E. Lannon, which is captained by Tom Ellis and currently runs charter sails out of Gloucester Harbor from Seven Seas Wharf off Rogers Street.

Burnham also currently runs charters on his schooner, the Maine. He said the Ardelle, however, will stand as an expansion of his charter work; it's pegged to accommodate 49 people, rather than the Maine's capacity of six.

Burnham said he will begin building the vessel after the framing, which sets the skeleton of the boat in place.

Up 'til now, Burnham has modeled and planned the construction project and designed — or "lofted" — the frame. He said he's been preparing the frame since last August.

"(The frame up) is kind of a symbolic moment in construction of a vessel," he said.

In days when Essex built wooden boats as quickly as the clammers collected their shellfish, it took an entire yard's worth of men to hoist a frame up onto the keel of a schooner.

The call "frame up!" would draw men from across the yard for the lift.

Burnham stands as the 28th boat builder within his family to own and operate a shipyard in Essex.

The Burnham family built boats since 1819. is the 28th Burnham to operate a shipyard in Essex since 1819, He said that he grew up around the culture of boat making.

Burnham noted that he builds the wooden boats from scratch as well. The shop that he works in includes its own sawmill, and the boards used to construct schooners like the Ardelle are crafted in-house, along with the vessel's sails.

Burnham said he expects the Ardelle to hit water in late spring, and won't be the only one working on the project. He anticipates a number of boatbuilding craftsmen will join in the effort.

"A lot of people in the area have roots tied to boat building," he said.

To read the story online go to the Gloucester Times website here.
Posted by Harold Burnham at 8:41 AM 1 comment:

Alden got a chance to drive the new yardhorse in the yard and the tractor/fork lift has proven to be an invaluable asset. It has helped move materials, woods, small sheds, and every heavy item that used to take Harold days 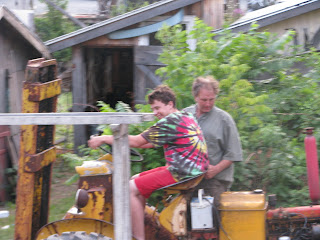 to do by hand, using rollers and mostly his back. So, we don't have a name for the new "yard horse" but it is a welcome addition to the yard. 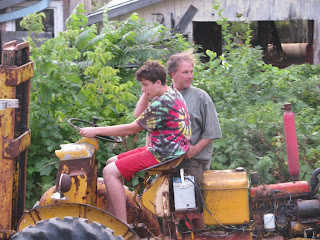 Posted by Harold Burnham at 12:33 PM No comments:

You Must Be Harold's Dad

i
Charles "Chuckie" Burnham has had a great deal to do with Burnham Boatbuilding, whether offering advice or encouragement or occassionally a few jolts of reality. A true force of nature, Chuckie is so often asked You Must Be Harold's Dad that he does have a ready answer...as he does for many questions poised to him. Thanks, Chuckie, for all your help and encouragement!
Posted by Harold Burnham at 1:53 PM No comments:

Pinky Maine at Rockport's Motif No. 1 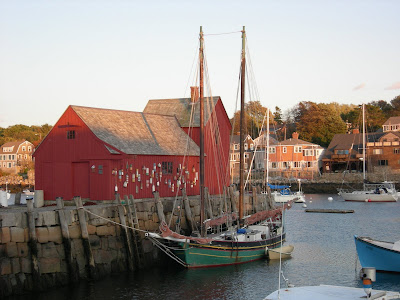 Our friends Ned and Suzanne sent this photo today of the Pinky Maine during last fall's sail "around the world" Cape Ann is our world and hitching a line to Motif No. 1 is one of Harold's favorite spots p to tie up in Rockport, MA.

Posted by Harold Burnham at 1:16 PM No comments:

This article about Harold was written in 2000 and published in Yankee Magazine. The author and photographer are credited in the story which can be read here  It is a good read!! 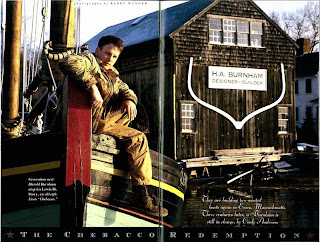 From Yankee Magazine 2000
Posted by Harold Burnham at 10:59 AM No comments: