Drawing the Lines to the New Schooner 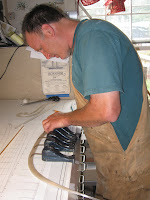 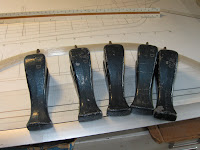 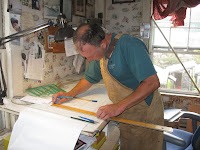 Harold is finishing up the design for the new schooner he plans to begin building sometime within the next 12 months. In the photos shown here, he is working on the final line drawing . The photos show him lining up one of the sheer lines with Ducks given to him by the late William Duggan.
Harold completed the final drawing after building three half models and making three initial drawings. Our existing Pinky Maine built in Bath, Maine by the Apprentice Shop was the starting point for the new boat. Howard Chapelle had traced her lines from a half model he found in East Boothbay. For the new schooner, Harold started out with Chapelles' lines and made a model of the existing Maine first. After he made changes and did a second model, he developed construction arrangements and a sail plan. Additionally, he incorporated the changes he wanted to make by designing the new Maine to look more like the original vessel built in 1845 by Ebenezer Burnham. He drew the lines to that model and made a few more changes and drew another set of lines and then carved one more model and came up with the final line drawing on the Mylar.
Posted by Harold Burnham at 5:15 PM No comments:

Schooner Ernestina - what a ship! 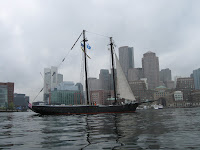 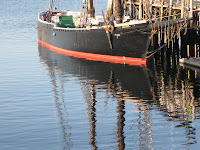 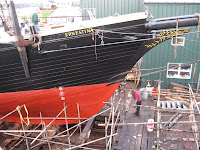 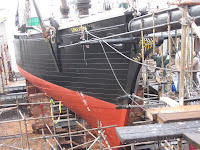 It's hard to believe how much time has gone by since early May when the summer was ahead of us instead of behind us. But, May was a big month for Harold and the schooner Ernestina which was brought from Boothbay Harbor Maine to New Bedford after nearly a year long restoration of the front end of the schooner. The delivery from Maine to Massachusetts was made by employees of the Boothbay Harbor shipyard and Harold Burnham, who had been hired under contract by the State of Massachusetts to oversee the restoration of the schooner and had spent nearly one year on the project living part of the week in Boothbay Harbor. Paul Brawley of the Department of Conservation and Recreation was Harold's boss and Harold served as the owner's representative overseeing the restoration of the bow end of Ernestina. Harold based himself in Boothbay for one year, coming home for part of the week but spending most of it sleeping right aboard the Ernestina in the captain's quarters as the work went on. It was an amazing year for Harold and for all involved in the project. The restoration work on the first part of the boat was absolutely first rate. Harold was part of something really, really fantastic and he has said it more than once "it was the best job I have ever had" in part because he could be on site during an historic restoration, all his skills were called upon and he became an essential part of the success of the restoration. 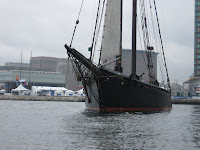 Posted by Harold Burnham at 1:20 PM No comments:

Harold behind the 6 string guitar

For those of you who have met Harold, well this photo just sums up his spirit!
Posted by Harold Burnham at 5:17 PM No comments:

The Provincetown to Gloucester Connection 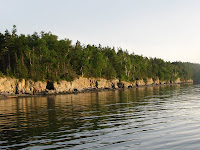 The Gloucester Times had a great article in its newspaper yesterday about the Gloucester to Provincetown race we participated in just after Labor Day weekend. What the article describes is that long standing connection shared between Gloucester and Provincetown as havens for fishermen on Massachusetts Bay and beyond and the schooner races they once had with one another when Provincetown, too, was full of schooners. What is great about arriving to Provincetown by boat is that well before you reach land, you see the Pilgrim's Monument on the horizon. The monument was completed in 1910 and commemorates the Mayflower Pilgrims’ first landing in the New World in Provincetown, in November 1620. The monument looms 252-feet above Provincetown. It is a landmark for sailors and a reminder of the town's immense historical significance.
This article in the Gloucester Times has a few quotes from Harold thrown in for good measure. Here is the link:
http://www.gloucestertimes.com/punews/local_story_256223223.html Also, don't miss Harold's free lecture tomorrow night hosted by the schooner FAME and Salem Maritime National Historic Site entitled “Restoring the Schooner ERNESTINA,” 7 p.m., Sept. 16, at St. Joseph Hall, 160 Derby St., Salem.
Posted by Harold Burnham at 8:08 AM 1 comment: 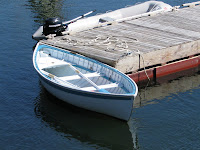 So far in this blog we have not really gotten into the details of schooner building and the many aspects of it. We hope to remedy this as Harold begins building his new Pinky Maine which is currently in the design phase on his desk upstairs. Today's blog just offers a chance to see a wonderful glimpse of the schooner Isabella which was built here in 2006. This short film was made by Stephen Hastings, Harold's cousin and is well worth a look and was no easy feat for Stephen putting this together as he had a camera taking photographs every 20 minutes or so for about 8 monts. What he pieced together from photographs is amazing. Do notice the rising tide and snow on top of the miniature captain's head. This video is fantastic!
http://www.metacafe.com/watch/1148149/the_essex_built_schooner_isabella/
Posted by Harold Burnham at 9:09 AM 1 comment:

Schooner Races Back to Back 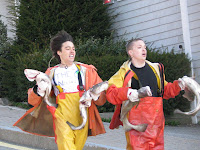 The past few days the Pinky Maine has done quite a lot of racing with the 25th annual schooner festival on Sunday and a Tuesday race from Gloucester to Provincetown. The Sunday schooner race was very exciting with some challenging conditions - a lot of wind and some tough tacking but we did well and placed somewhere in the middle of the fleet. On Tuesday, we entered the Fishermen's Race to Provincetown which is an event organized by a great group of folks from Provincetown who are encouraging more schooners to enter the race each year. With very little breeze the race was a challenge but the Pinky Maine ended up in third place in Class B. Not too shabby!

We also received some great footage from John Browne Videographer who shot the film from the deck of the Alabama. They include some nice footage of the Pinky Maine in the Gloucester race. Here is the link http://www.youtube.com/watch?v=7ZVaSY3w6Sg
John BrowneVideographer / ProducerPerkins slip renter.
Posted by Harold Burnham at 1:30 PM 1 comment: 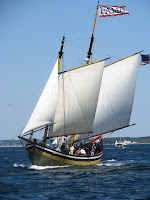 This weekend marks the 25th annual schooner festival in Gloucester, an event that was in part initiated by a dear friend Scott Stuart Eddington who sadly passed away this year. Scott helped get a lot of things going in Gloucester - he was an idea man and instigated things like whale watching, schooner festivals, and many other community-minded events - as well as being a great photographer.
I met him while making a circumnavigation with him in 1991. It was an early trip as mate on a steamship and he was the AB on my watch. During our time at sea we schemed about what we might do back in Gloucester when we got home.
It was with his encouragement that we built the Muscongus Bay sloop "Kim" as a charter boat and started our charter business in 1992. He was with us through a lot of activities we have done since. We miss him.
Last night they had the Mayor's Reception and the mayor of Gloucester and Sen. Bruce Tarr talked about the proud fishing heritage of Gloucester but also took time to congratulate the Gloucester high school sailing team. Who knew! It was great to see the team and they wished them a good season. The harbor looked spectatucular as we were able to stand on the deck of one of the large visiting schooners at one point and watch the full moon come up as dusk settled in...the mast lights of the Bluenose II and other schooners lit the harbor and it was great to see so many tall masts around Gloucester - which is sometimes too quiet for my taste. To see the activity of schooners arriving, and the crews spreading out throughout Gloucester, greeting each other and looking forward to two days of racing was great. We will give you a wrap up story of the schooner festival after the weekend. For now, enjoy the three-day holiday weekend!
Posted by Harold Burnham at 5:17 AM No comments:

Sailing on the Pinky Maine 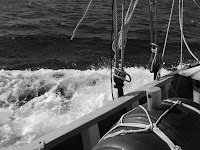 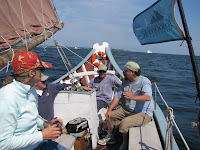 It is nearly Labor Day weekend and we have had a full summer of sailing on the Pinky Maine. The Pinky Maine is available for charter and we have had some great charter experiences this summer. We had our first overnight charter for a lovely couple from the Berkshires, we have taken large families for six hour sails to Manchester and back and this coming weekend we are taking a crew of experienced mariners out to particpate in the 25th annual Gloucester Schooner Festival. The Pinky Maine was also our summer home for us as we cruised in Maine for nearly three weeks in July. We reached great places like Valley Cove near Southwest Harbor, Dix Island, Port Clyde, Jewell Island to name a few. A highpoint was the four days we spent with Charles and Maria Burnham aboard their Friendship Sloop "Resolute." We raced in Rockland Harbor during the Friendship Sloop Days while also taking friends out for a sail on the Pinky Maine.

Anyway, this is the time to join us on the Pinky Maine. We think fall sailing is among the best as the breezes are freshest and when it is cool there is nothing like a mug of hot mulled cider off our wood stove to spice things up!
Posted by Harold Burnham at 8:58 AM No comments: 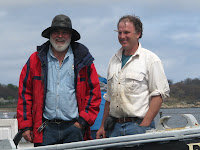 This blog was launched on Sept. 1 which always symbolizes new beginnings So as we wind down the charter business for summer and begin working on boat building projects for fall., it seemed like a perfect chance to reach out to more people and connect with new and old friends. There is a lot in the air for me as we are hoping to build a brand new schooner in the spring of 2010 which I plan to detail on this blog in full. For now, we are lining up projects and wrapping up others. In May, Harold completed a year long contract assignment on the schooner Ernestina. That is a story we would like to talk about more fully and Harold is scheduled to speak this month in Salem at St. Joseph's Hall.

Posted by Harold Burnham at 7:50 AM No comments: